The Benson Hotel, located in Portland, Oregon, was looking for a quick way to increase hotel bookings before the end of the month. Over the course of three days near the end of August 2017, this property wanted to showcase their 20% off rooms and discounted valet parking special on paid search.

Due to the way that Google AdWords serves advertisements, we knew it would be tough to get solid visibility across all of our ad groups and campaigns within the account for this very short sale. That is why we decided that the new promotion extensions within AdWords would probably be our best chance to bring in additional revenue. Adwords Promotion extensions work by enabling the advertiser to showcase a specific deal/sale at the bottom of correlating ads you know have performed well in the past.

Previously, promotion extensions have been available to use only during specific holidays. Now there is a drop down feature allowing you to select an OCCASION, ranging from Christmas to Boxing Day if you deem fit. You have four options in showcasing the PROMOTION TYPE, the first is a monetary discount and the second is a percentile discount. Both of these options can also be further limited by displaying “Up to monetary discount” and “Up to percent discount”. Below that is a 20 character text box allowing you to describe your ITEM. FINAL URL lands your customer onto your desired page. There is a feature called PROMOTION DETAILS allowing you the option of displaying “On orders over” and a “Promo code”. Insert your “Start date” and “End date” (not shown in the example below). Lastly, there are two remaining features titled URL OPTIONS and ADVANCED OPTIONS allowing you to customize this extension further. 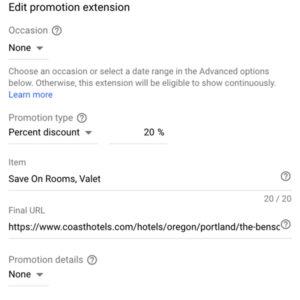 One restriction while choosing the percentile discount is that this “ __% off” is fixated at the front of the passage while then allowing you 20 characters to write about the item you are promoting. The red arrow in the examples below highlights the “__% off” AdWords automatically displays first on the live ad. As Google continues to roll towards a mobile-first index, the aesthetic differences between the ads themselves have become more distinguishable. Adwords Promotion extensions on mobile devices have a large price tag icon that could potentially capture the attention of consumers who may have become accustomed to seeing standard AdWord ads. The Adwords promotion extension total real-estate is also larger on a mobile platform in comparison to desktop.

Between August 25th and August 27th 2017 our Adwords promotion extension for The Benson received 42 clicks with an approximate impression figure of 521. The click-through rate was 8% with an average cost per click of $1.06. With three conversions resulting in a total conversion value of $743 and our total cost being $44.55, The Benson’s return on advertising spend is 16.67 to 1.

Promotion extensions are a relatively new feature for Google AdWords beta. Why not take advantage of some of the exclusive features of this “New AdWords Experience”? Promotion extensions allow advertisers to serve exclusive offers to their customers and to easily call out that promotion within ads through your account, campaign or ad group. Our experience with promotion extensions in this instance showed an increase in the overall CTR, conversions, and revenue on the account. While also showing a decrease in the amount of time spent creating new sale specific ads. Promotion extensions are easy to set up and aim to give your offer more visibility to your audience. Transitioning into the new AdWords user interface clearly has its positives and negatives, but I don’t know anyone who would not like a 16:1 return. 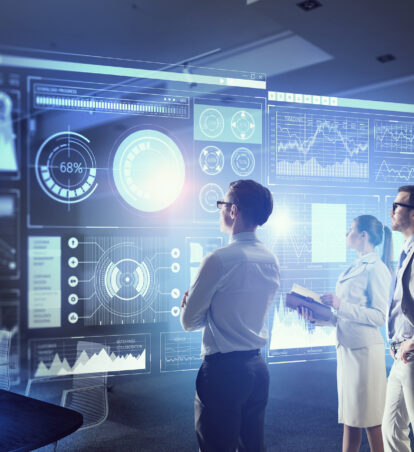 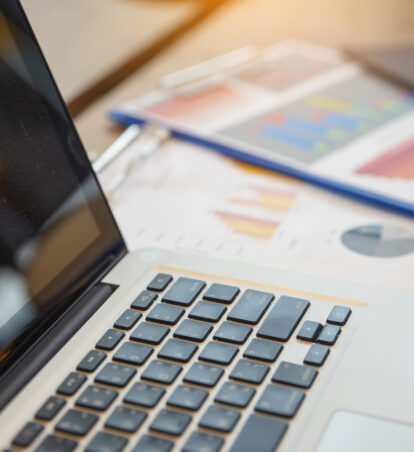 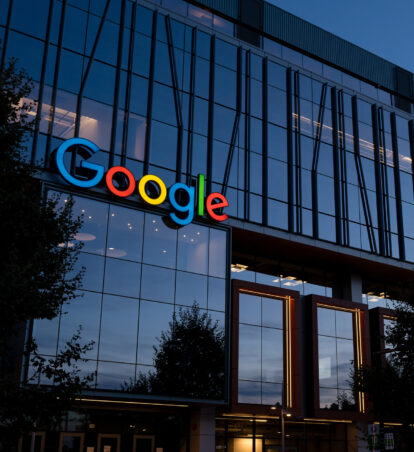